Ngunguru River Excursion - 29th November 2015
On November 29th at 8:15 am a group of four armed with GPS, Topographical map and a camera attempted to river walk, bush and bank struggle from the bridge at the end of Omaikao Rd to Ngunguru Rd fourteen kilometres downstream.
The flow was quite low. At a point near the basalt columns all the flow was passing through a 1500 by 300mm rock gap.
After about 5 kilometres and 5 hours into the walk we decided that it would be prudent to leave the river at the River Rd ford and walk River Rd to the River Rd Bridge and then continue down the river to Ngunguru Rd thus missing about 5 kilometres of river. It was another 3.2Km to our exit point at Murphy’s farm.
We intend to return and walk the section we missed this time. It is worth noting that this trip down the Ngunguru River could also be managed in the summer with a small waka as there were many long pools divided by short rapid sections and waterfalls where the waka could easily be lowered over.
For its whole length the river travels through a steep sided, bush lined gorge including the first kilometre from Omaikao Rd where it travels through steep farmland. Throughout all the sections that we hiked it is very scenic. It is a very beautiful gem in our area. The larger trees were mostly Towai, Kauri, Tanekaha, Taraire, Rimu and Tawa. Much of the understory was Taurepo in bloom. This is the most extensive Taurepo coverage I have ever seen.
We noted very little birdlife. There were several small groups of Pateke of up to five ducks. In small numbers we also saw some Tui, Piwakawaka, Greenfinch, Riroriro, Mallard ducks and Eastern Rosellas. In the river we also saw that there were fresh water mussels, shrimp, Koura and one kind of small fish about 60mm long. In the flatter slower areas there were large areas of a grass like weed on the bottom.
Some cattle damage was noted in the earlier section at 35 36.4047S 174 25.9998E where they had been down to the water to drink. See the attached photos. The bush seemed to be quite heavily grazed by goats and pigs. In the steeper wall sections this caused frittering of the unstable wall that would easily erode in the rain. In all sections of river there was a considerable amount of fine sedimentation that heavily clouded the water when we walked over the gravel in the stream. One assumes that this is caused mostly by forestry runoff. Because of the nature of the river and its depth we were unable to check this through the farmed area. 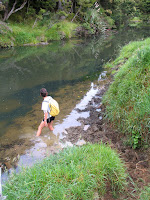 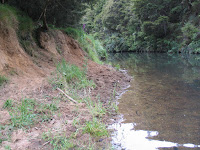 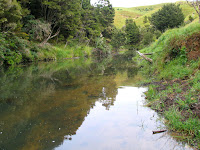 Near the beginning at – 35 36.4062S – 174 25.9994E in the farmed area it was sad to see that gorse overspray had recently killed most of the Kanuka and Manuka as well as some tanekaha. See attached photos. 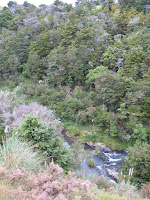 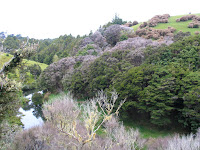 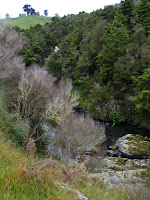 All in all it is a stunning scenic river. One we wish to visit to see again and complete the trip.