The neat thing about seasons is that you get to see all the changes again and again. All the neat things. The changes are never exactly the same though. Its like watching waves on the ocean. They are all waves but all different to the next.
Kumerahou is in full bloom. It's yellow pompoms lighting up in different places this year but no less spaectacular. The leaf litter in the bush is full of hooded orchids of various kinds. Toropapa has finished but Kowhai and Clematis are colouring the bush. Birds are pairing up and claiming territory. Blackbird scraps are common. Tui is rocketing through the branches like a jet fighter claiming and defending his claim. They are bullys! Three Weta have moved into the weta house.
Warmer days now. 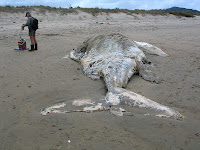 Last sunday, the 2nd September about 180 locals visited our beautiful sandspit  and walked its 2.7 km beach to celebrate one year in public ownership. It was a wonderful communal day out. Gray old day but everyone had fun. It is such a special place. We will be forever thankful to those that took up the battle to prevent it from being turned into yet another disaster of exclusive housing. Unless one has a boat it is difficult to get to.
There was even a dead 9 metre whale on the beach.
Wanganui Collegiate Hockey team enjoying the Sandspit. They were visiting Whangarei for a tournament.
Posted by Melva and Hilton Ward at 4:50 pm